The new May 2019 update for Windows 10 is coming soon. Microsoft has just announced that you will need more storage space to upgrade Windows 10 to the May 2019 Update. Back in Windows version 1809 (the October 2018 Update) Microsoft increased the free space requirement before upgrade to 16GB but as of May it will be changing to 32GB.

If you are running the 64-bit version of Windows 10 this is a 12GB increase in free storage requirements and a 16GB increase for the 32-bit version.

Most computers will have enough storage out of the box to support the new Windows 10 May 2019 Update but if you main storage volume is filled up with data files you have have issues.

You can read about all the new requirements for the latest version of Windows 10 here https://docs.microsoft.com/en-us/windows-hardware/design/minimum/minimum-hardware-requirements-overview

If you are having a problem updating to the new May 2019 Windows 10 Update or you would like some assistance with the update, please give us a call at (480) 240-2946 .  Chandler Computer Repair Company is a Chandler, AZ based computer service company with offices through our parent company in many other major cities. If you need computer assistance please contact us. 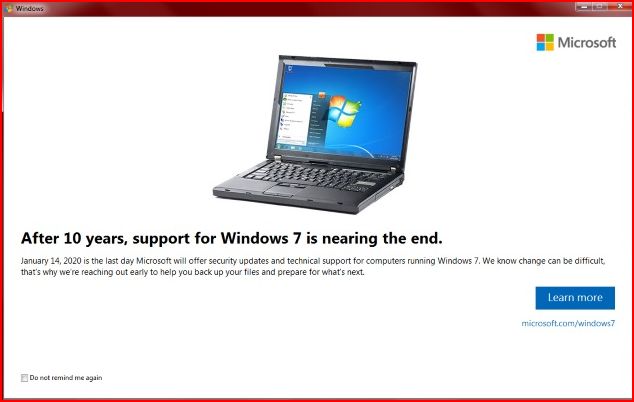 Windows 7 users are starting to see pop-up messages directly from Microsoft (update) telling them that support for Windows 7 is coming to an end.  Windows 7 has been out for 10 years and after January 14, 2020 there will be no more support for Windows 7 (you can read about this announcement on our parent company’s blog https://www.karlstechnology.com/blog/end-of-life-for-windows-7/ ).

The pop-up message from Microsoft reads:

After 10 years, support for Windows 7 is nearing the end.

January 14, 2020 is the last day Microsoft will offer security updates and technical support for computers running Windows 7. We know change can be difficult, that’s why we’re reaching out early to help you backup your files and prepare for what’s next.

Microsoft is not going to force any user to stop using Windows 7, and there is nothing to stop you from continuing to use Windows 7.  But you will not get any security updates or patches for any bugs, issues or future updates (hardware drivers from Microsoft, etc).

If you would like to upgrade to Windows 10, give us a call at 1-800-620-5285 and talk with one of our support specialists to figure out the best way to move away from Windows 7.

To read more about the new Windows 7 pop-up message read the latest updates on betanews.

The latest Windows 7 and Windows 10 April 2019 Windows Update is having issues with some Anti Virus vendors.  Microsoft has acknowledged that both versions of Windows may have serious issues if incompatible anti virus software is installed.  Microsoft has detailed in their support document for the latest update: https://support.microsoft.com/en-au/help/4493472/windows-7-update-kb4493472 :that it has worked with multiple anti virus software vendors to figure out why their update is causing issues for some users.

McAfee Anti Virus is one of the software that will trigger bugs in Windows 7 and Windows 10.  The bug appears to degrade performance significantly and seems to effect Windows 7 upgrades more than Windows 10.  There is no known fix for this issue and Microsoft and multiple vendors are currently working on resolutions.  Microsoft is saying if you are running one of the problem antivirus platforms that you should not upgraded to Windows Update KB4493472 or if you have you should disable your antivirus (which is not a good idea).

A better idea might be to disable the problematic anti virus and download a temporary free anti virus, like Avira, until Microsoft can resolve their issues with your anti virus of choice.

If you want more information on antivirus products that are having issues with this latest Microsoft Windows bug, see this article on ghacks:

Some Apple models obsolete in a month

Apple usually begins this process or retiring support for hardware that has not been manufactured for at least 5 years because repair parts are no longer available.  Some of these models are almost 7 years old and were very popular but replacement parts for them are getting very hard to find.

If you have an older Apple product on the Apple Vintage and obsolete products list and need replacement parts contact us.  We have many sources for hard to find parts and have become resourceful at locating even the rarest of items.  We can also assist you in transitioning to a new system if the cost of repairs is too high.

Microsoft has finally decided to enter the desktop market with the Surface Studio, their very own, all-in-one PC. Microsoft managed to wow the audience as it was unveiled at the recent Microsoft Conference. The desktop features the thinnest LCD of it’s size ever produced at a 12.5mm. The device looks similar to Apple products of the past, with it’s rather, simplistic look, with something new, a multi-touch display. Only one cable is necessary for the device to function on it’s own. The 28 inch display outputs 13.5 million pixels, which manages to be around 63% more than 4K displays today. The glory lies within, as the device ships with the latest in technology. It’s powered by Intel’s i7 Core Processor and Nvidia’s 980M Graphics with varying options for hard drive storage and RAM (Random Access Memory).

Something entirely new that Microsoft is launching side by side with the Studio (although not included) are a variety of peripherals such as the Surface Dial. The dial aims to create easy access to a variety of applications from simple web browsing to different color palettes in the new Paint 3D.  The device ships with the well-known Surface Pen that is useful in acting as a stylus, pen, or painting/drawing tool for these applications. Microsoft plans for more tools for users of the Surface studio as the device matures.

You can pre-order the Surface Studio for $2,999, $3,499, or $4,199 depending on your hardware configuration. The device ships with the Surface Studio, Surface Pen, Surface Keyboard, Surface Mouse, and power cord. Limited availability with the holiday season. Find more information from Microsoft themselves here.

Google Chrome version 54 was just released. If you already run Google Chrome your browser will automatically upgrade the next time you open the browser. New features include a rewrite of how YoutTube Flash videos play which improves performance and a security overhaul of how certain types of code is sandboxed.

You can read more about the changes at: https://googlechromereleases.blogspot.com/2016/10/stable-channel-update-for-desktop.html 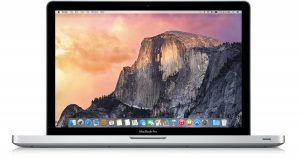 Chandler Computer Repair Company has been on social media for some time but we are refocusing our efforts to be more socially connected.  Here are links to all the platforms we are on, if you would like to communicate on other social media platforms leave a comment below and we can look into setting up other accounts.